The Durrells in Corfu

LIBBY’S LIKES: THE DURRELLS ON PBS

I’m not a TV watcher. It’s very, very rare that we turn on our TV and then it’s usually for Masterpiece Theatre. But it’s been months and months since I’ve looked at it.

And then, last week, a friend asked if I was watching
The Durrells in Corfu on PBS

Because I had already missed two weeks/episodes, I went to ITunes to buy the series. Then, somehow, I got to the main PBS page. Do you know,if you make a donation (either at one time or, as I did as a monthly sponsor) you have access to ALL of PBS? 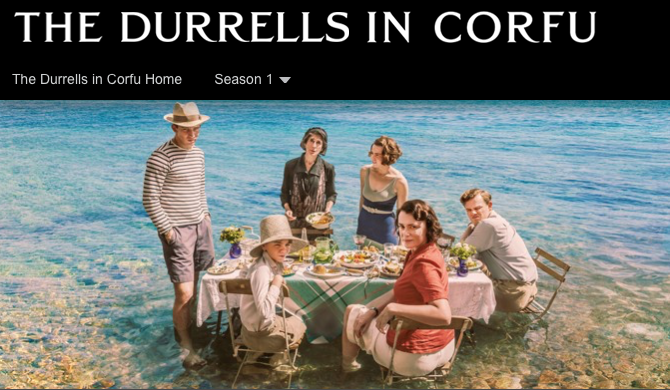 So, I’ve watched and been totally entranced with the Durrell family. It’s a wonderful, wonderful series.

Wanting to know more about how Lawrence Durrell, the writer, actually fits into this I did some background research. In this series he is the eldest brother who arrives on Corfu with his Mother and his siblings. In “real life” he and his wife were already there when, in 1935, his Mother and his three siblings arrived.
The series is based on Gerald (the youngest sibling) Durrell’s trilogy, “My Family and Other Animals.” Gerry, in the TV series, is absolutely captivating!