“It was the week before 9/11 and one of our tour guests here in Provence discovered the ‘love’ of his life……a concrete, yes concrete, gnome that he just had to take back to the States.  Well, this gnome, whom the group named Monsieur Awful Heav-vee, became the mascot of the week.  He had a seat in the car, complete with seat belt.  He came to dinner at night.  And you might even have seen him lounging by the pool.  It was great fun.” 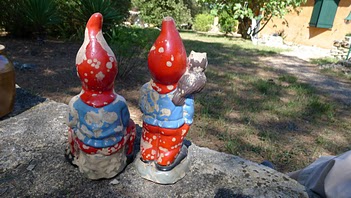 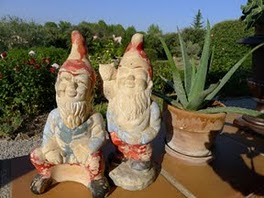 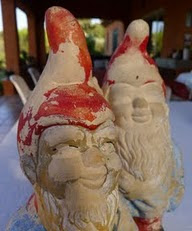 “So it was later that year when we were leading a tour just for buying antiques that I was in a small shop outside of Aix…..I spied these 2 little guys and zeroed in.  In my mind, I am thinking I wilI pay 100 Euros for the 2….there was no price on them.  I wanted them sooooo badly. The proprietor spoke only French and thought I did NOT understand French so she proceeds to tell her cohort in French, ‘I only paid 5 Euros for them, what should I charge’.  I am getting ready for some big mark-up and then she says ’20  Euros la pair”!  20 Euros for both! I felt like I had snagged the buy of the week.” 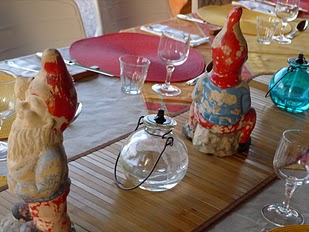 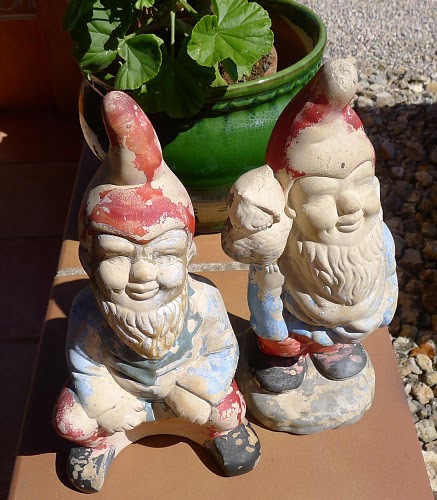 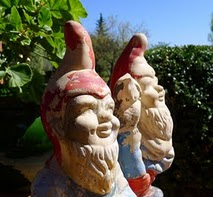 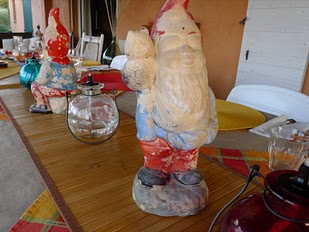 And in conclusion:
“So now they have been part of the family for 10 years.  I use them as part of a tabletop at dinner or they might just be sitting on the wall watching a petanque game.  Too fragile to travel, they will always be at home here in Provence. They don’t have a name….. Hmmmmmmm……This has me thinking.  Maybe we should have a Name that Gnome Contest….”
Tell me what you think! Is this cute or not? Would you have fallen for them?